We featured in Truck and Track magazine

Top up what you take out!

Battery problems remain at the top of all issues for non-starts amongst fleet vehicles. Truck and Track is aware of how much this costs fleet managers and owner’s year-on-year, and so we asked Rotronics (www.rotronicsbms.com) to do a study of a number of vehicles to understand what patterns might be leading to such large and unnecessary costs.

This article provides an overview of how using the correct technology and workshop practices can significantly reduce your costs. Rotronics is the UK partner for CTEK and Midtronics battery management technology and an industry leader in proactive battery maintenance and service solutions.

Draining the battery with engine off

The Rotronics team tracked two identical vehicles from December 2016 to January 2017 and found that the vehicles were being used with the taillift in operation with the engine off, and this caused unnecessary and significant drain on battery performance.

This is not an issue if the charging system can recharge the drain. However, all workshops have to consider that, in terms of battery management, what is taken out must always be replaced: otherwise there will be a constant under-performance.

Ken Clark, Managing Director of Rotronics, reports: “We have been looking at benchmarking a number of taillift vehicles to extrapolate relevant data to understand why so many excessive non-starts are prevalent with this vehicle group.

“At the point when the test vehicles entered the workshop, their battery condition was in a discharged and heavily depleted state. The short-term solution was to recharge and start to understand the cyclic position of the vehicles and analyse a number of potential
issues.”

Possible reasons why a battery could be in a depleted state:

Data loggers were then installed onto both vehicles to measure the cyclic Volts and Amps being generated, whereby data would then be downloaded 60 days later at next service inspection.

The Rotronics team saw an obvious and significant drain on the vehicles’ systems as a result of operating the vehicles’ taillifts with the engine off, and this load would increase yet further with a loaded taillift. It was evident that such prolonged use of the taillifts, and subsequent high load draw on the vehicles batteries, would run the risk of premature failure, reduced serviceable battery life and increased non-starts.

Ken Clark explains: “As the batteries were in a low state of charge, coupled with being out of action over the extended Christmas break, there was little time for the batteries to recover without suitable workshop recharging. This resulted in the vehicles having to be ‘jump-started’.

“It is evident that deployment of the taillift drains a large amount of current from the battery.  For example, on one day in January, the battery lost over 20 Amps/hr in 20 minutes, with the battery dropping from an already discharged 12.35V to 11.75V during this period. This highlights that the power demands used are not able to sustain the heavy consumer loads for any length of time whilst the engine is off.

“Our Battery Management Programmes show considerable savings for fleet owners and managers, reduce non-starts and improve battery replacements. It is important to introduce the correct diagnostics and test-and-charge processes into your workshop. The full electrical system and battery test, using the correct equipment, takes under two minutes to complete.”

The essential tests for a healthy commercial fleet are:

Test & charge technology in the workshop

Ken Clark again: “We can provide the latest generation test and charge technology from Midtronics and CTEK, which is designed for the heavy-duty and commercial vehicle workshop.

“Our best results are from fleets whose workshop technicians are regularly testing and charging all vehicles entering their workshop. They understand that vehicle safety, cost reductions and customer service are central to any growing business.”

So contact Rotronics now for a free evaluation and demonstration on how you can save time and money. For more information on Rotronics and Battery Management Programmes, go to
www.rotronicsbms.com, call Ken Clark on 0121 526 8185 or email [email protected]

Rotronics is part of Rubery Owen www.ruberyowen.com, a family-owned group established over 130 years ago at Darlaston in the West Midlands. At the forefront of vehicle technology since the birth of the motor car and synonymous with quality and enterprise over the years, Rubery Owen now operates eight group companies across a diverse spectrum of automotive markets.

This article was published in Truck and Trade Magazine in April 2017. 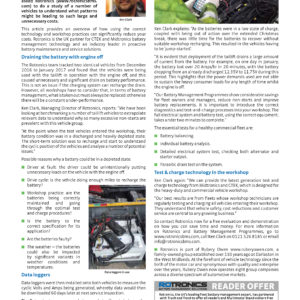